Ri Ye Xiang is one of Singapore’s oldest surviving rojak stall, with over 40 years of history. It is famous for its traditional taste and array of fresh ingredients, such as mango wedges, white fungus, jambu, turnips, green apple, cucumber, pineapple, tau geh (bean sprouts), tau pok (fried beancurd), you char kway (fried fritters), and a choice of century egg or cuttlefish, tossed in superior quality prawn paste and self roasted peanut bits. However, we thought the you char kway to be slightly tough, but this maybe due to the way it is normally prepared; barbequed then coated with hae gou (prawn paste).

In the past, customers would shout out their omelette orders to the Orh Luak Ahpek (Hokkien for Oyster Omelette Uncle). But of course, we would not do the same. The orh luak that was served to us was fresh, slightly saltish, and when dipped in chili, sent notes of tang and spice. You can also try the BBQ Chicken Wing and Satay for variation. We thought the satay’s peanut sauce could have been a little thicker so that it coats the meat fully, but otherwise they were tasty.

Moving on, we had some main dishes. The BBQ Stingray was fresh and juicy, unlike the common dried out ones. Drenched in fiery sambal, we thought the flavours and textures blended well. Try it with their chin-chalok sauce for a brighter finish. Alternatively, if you don’t eat seafood, you can try the Prawn Paste Chicken that was crisp and delicious, or the Salted Egg Pork Ribs that was tender and very juicy, The amount of salt present was just enough to highlight the natural taste of the pork.

The chef also prepared his specialties for us to try, that include Baby Kai Lan and Cereal Prawn. The dishes were decent, with the cereal prawn being completely coated with generous amount of cereal crumbs. Furthermore, they were springy fresh and very crisp at the shell, we highly recommend you to try them. 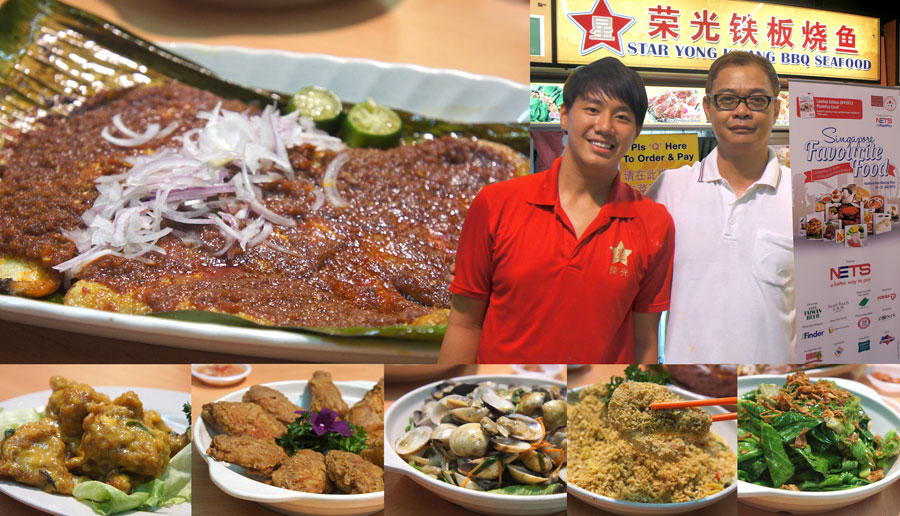 We finally hit the desserts with a Pow! – Power Chendol that was absolutely top notch. It is very value for money because they do not use gula melaka syrup for their chendol, but use pure natural gula melaka, melted then drizzled on your ingredients and icing, for a sticky texture and heavenly taste.

The Liu Mang Bing (Gangster Ice®) is also a hit. The name itself is unique to begin with – Liu is the first Chinese character of liu lian (榴莲/Durian), and Mang is the first Chinese character of mang guo (芒果/Mango), that when put together as Liu Mang sounds like the word ‘Gangster’ in Chinese. That aside, the dessert stayed through to its intensity. We were pleased to find that durian although resembled ice cream was actually pure durian flesh, and mango was in large chunky cubes. The two fruit combination blended so well and has such rich flavours, you must try it to believe it.

The Red Ruby bowled big and well separated rubies, very unlike those small and sticky ones we get elsewhere. We were able to bite on the crunchy chestnut inside the rubies, and thought the dessert was refreshing. Try also the Mount Fuji, a popular Japanese green tea and red bean dessert.

If you know of other good rojak, omelette, sambal dish, durian dessert, laksa, chili crab, prata or tau huay out there (the list can go on), leave us a shout out on Facebook. You can also vote for your favourite local vendor to be featured at the food village from now till 2 June 2013.

Do you like this event? Let us know by choosing if you Like it or Hate it below.

Follow Us
Subscribe to our Email Bulletin
Enjoy reading our reviews and recommendations? For the best dining promotions and latest news, register below to stay in the loop!
Send this to a friend