My Makan Place – A Sedap Place To Makan At Tanjong Katong

Owned by a family of four, My Makan Place is a newly-opened restaurant selling Indonesian fusion food that resides in Tanjong Katong. Although they are Chinese Singaporeans, cooking Indonesian food has always been the mum’s passion. Working previously as hawkers, they are also passionate foodies who have had 20 years of experience in making Mee Rebus and Mee Siam. 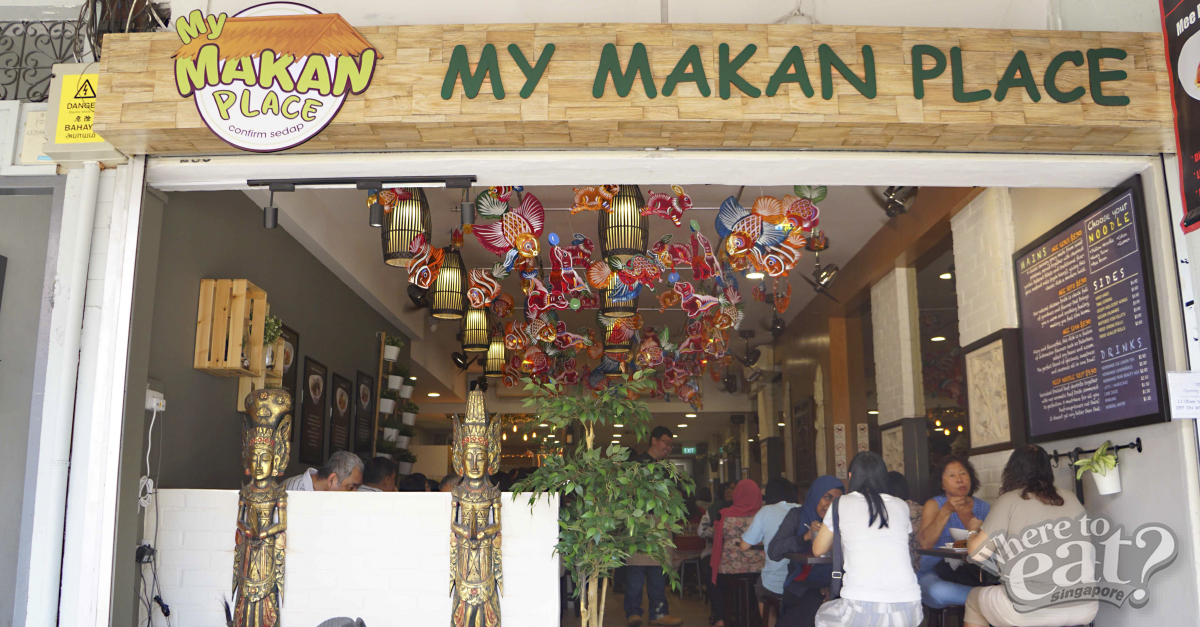 Customers can get to choose from a variety of noodles for its mains: ramen, udon, yellow noodles, bee hoon and kway teow. Onsen eggs were used to replace the usual hard-boiled eggs that you see in many traditional dishes. Well, ramen and udon you say? How would that pair with the traditional soups or gravies? Let us break it down for you!

It’s a fusion restaurant after all. So, ramen noodles for the Beef Noodle Soup! It is a dish that should not be under-estimated. The al-dente ramen noodles were springy and the meatballs were REAL. We meant to say the meatballs were filled with mouthful of meats, unlike others that contain a lot of flour. Although beef briskets were originally used, they decided to go with the short ribs (premium cut of beef) and we are very thankful for that because the succulent and tender short ribs were extremely tasty! Its beef broth is extremely light on the tastebuds and the sweetness of the broth leaves you pandering for more.

Adding a modern twist to this dish are the fried fish and awesome traditional five-spice seafood rolls (ngoh hiang). We felt that the udon noodles were a little too soft for our liking. The onsen egg complemented well with the gravy that gave off a little spicy kick. However, we did not quite like the starchy texture from the combination of the udon noodles and thick gravy. Tip #1: Stick to the original yellow mee!

Our second favourite dish goes to the Mee Siam! Similar to its sibling, the Mee Rebus, this dish included fried fish and ngoh hiang too – with the fragrant ngoh hiang evoking a taste of home. The beehoon noodles were soft and silky that you can’t help but to slurp them all at once. Surprisingly, the mild spicy and appetizing gravy was not as sweet as we’d expected it to be. In fact, it leaves you craving for more!

Yet another light dish is the toothsome Mee Soto! It’s almost like a comforting dish to go for if you are down with a cold. We were glad that ngoh hiang was included – bringing the dish to another level!

The Gado Gado, also known as an Indonesian salad, is an interesting mix. Akin to a treasure box, dig deeper to surprise yourself with more ingredients! The Tahu Goreng has a spicy kick to it. However, perhaps because we left the dish a little too long on table, the peanut sauce wasn’t as thick as before. So Tip #2: Make sure to have a bite of the Tahu Goreng as soon as it lands on your table!

Get that satisfactory crunch in My Makan Place’s Fried Spring Rolls and Crispy Mid-Joint Wings! Containing bits of meat, the spring rolls were well-fried and don’t forget to pair them with the sweet chilli sauce for a boosted taste. Every part of the wings is so flavoursome, especially its crisp skin.

My Makan Place’s drinks are mostly homemade. The Pear Beauty Mix ($2.90) is a rendition of the Pear and Chinese Almond Soup which is beneficial for cough. Brewed for many hours, this refreshing drink is great for clearing heat and cough. The Ice Lemon Tea ($2.90) is unlike any other Ice Lemon Tea as it contained additional jelly bits – addictive much! The tangy Lemon Grass Drink ($2.90) is invigorating.

A thumbs up for its recreation of the traditional dishes and we will definitely be back for more, especially its Mee Siam!